✿Howdy, I'm Dawn/ Dawnflower. I like to rp, and I'm the proud co-leader of Petalclan. You may see me in-game, on the forums or on the cafe. Message me about Petalclan or anything, my inbox is always open.✿

Call me Dawn out of RP.

I'm a calico she-cat with a firm but kind approach to life. I prefer to look at all aspects of life, not just the bright ones, which give me a reputation for being a bit down in the dumps at times. Due to my smaller size, I am a lithe and agile cat, who is a formidable and fast opponent in battle. 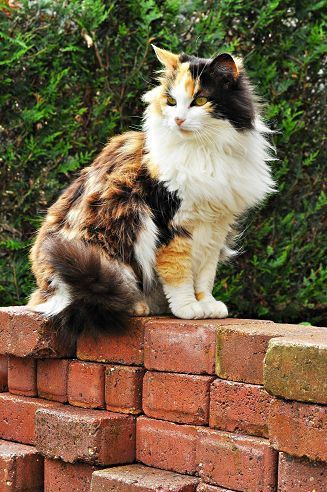 "Hurry! Come on!" Yellowfang yowled.
We had been walking for hours on end, with no rest, and I was starting to feel the burn in my paws, which had been scraped raw a long time ago. Why had we left Thornclan, I pondered, we had been happy there! It wasn't bad there, was it? Then it came rushing back. Slashstar and her cruel ways, ruling with torment over the whole of the clan, ever the oldest elder or the youngest kit. We HAD to leave. "Dawnflower hurry up!" I heard Yellowfang urge me again.
The rough forest was starting to break up, and I could glimpse the open ground ahead. I broke into a run, my feet carrying me faster the they had in weeks. I could feel the meadow air as I broke through the tree line and into the clear, with Reefheart and Yellowfang hot on my heels. Water! I could here it! I rushed forward once again and found a brook, winding its way through the flowering meadow. I drank the cool water until I felt bloated before collapsing on the cool soil. I heard the others flop down next to me, and i let out a big sigh. Here we would be safe.

I glanced around at my home, beautiful Flowerclan. It was amazing how quickly everything happens. It had only been 6 moons since we had arrived here, but everything had changed. From my position on the rock I could see everything, the new kits playing, the warriors strategising new fighting techniques, and the apprentices watching intently as the strong Flowerclan warriors tustled and wrestled in the clearing. Gosh it was peaceful here. But something gnawed away at my stomach, intent on ruining my good mood. Reefstar. Suddenly she had become ill, barely leaving her den except for nighttime, when she would come and sit on the rock and 'speak' to Starclan. She wasn't dying of old age, she was meant to be young and spritely. She had been perfectly fine up until only a few weeks ago. The colour had drained from her wise eyes, and she no longer shone when she spoke. Instead she looked...close to death. "Hey there lovely." I heard a familiar voice sound.
I instantly relaxed and turned to face it. Jet. My handsome mate, who had wandered into my life bringing with him a backstory which had intrigued me to the point of inviting him to live with me. I was suprised that Reefstar hadn't objected, seeing as he was a strange rogue tom who smelt of another clan. But she did, and I couldn't be happier. "Oh nothing," I replied, "just thinking of how beautiful our kits will be."
I remember the day when Lilystem, the medicine cat, had told me that I was going to have kits. I was so happy, bursting with joy at the fact I would have kits of my own! Jet purred lightly and sat down beside me. "Dawnflower I'm worried." he confessed.
A wall of shock hit me, making me cringe. "About what?" I asked tentatively.
"Our kits, the clan, the territory." he mewed softly, fear edging his tone.
I knew what he was talking about. Oblivionclan had been too much, with their hostile threats being thrown around at gatherings. It was insulting how carelessly they spoke, even towards Flurryclan, the biggest clan in the area. "I know, but wait, just until the kts are born, and then we can do something."

The kits had grown, but Reefstar was no better. We had raised our hopes when she finally held a clan meeting last moon, but once agin, she had declined. Rosekit and Petalkit had become Rosefur and Petalheart. They were beautiful, and I was proud of how far they had come. Petalheart had chosen to follow the noble path of the medicine cat, while Rosefur had chased after me rapidly, completing her training in only 4 moons. I had been beaming with pride at their ceremonies, which was only a moon ago. Reefstar had managed to get her strength together to perform the ceremony, so I could watch from the audience and grin as brightly as I did. But now the time had come. Rosefur had grown restless, waiting to leave. I felt terrible about leaving Flowerclan when our leader was so weak, but it had to be done. There was no future for us here. During secret night meetings I had talked to my most trusted warriors, Creampelt, and one of the medicine cats, Lilystem. Maybe Yellowfang could step forward and look after Flowerclan, though she had never had as much of a passion for clan life as I had. Jet had been the one who suggested the idea. He had told us stories of how over the meadows and through the forest, close to the moutains where Flurryclan and Sleetclan resided, there was another territory like this. Plentiful and close to the other clans, where we could form closer bonds. We had started planning at once, rushing around in secret, eatinga few more pieces of prey here and there, and whispering in secret. At last it was time to leave.

"Almost there Dawnflower, we can make it."
The journey to the new meadow had been easier then the journey from Thornclan. Our group, all six of us, had trekked through the forest, and were now nearing the mountain scape where we would soon live. Rosefur rushed forward infront of al of us and broke into a run. "I can see the flowers! I can see them!" she called.
In a daze we all rushed forward, pushing ourselves to go further, even though we were unrested and unfed. "Come on!" Jet urged me, his lithe black body whipping past me.
I grinned and rushed forward pushing myself and the others until we broke out into a meadow. It was beautiful.

"Rosestar! Rosestar! Rosestar!".
I felt so much joy. My daughter, leader of our new clan. My new clan. Our new clan. There was only 6 of us, but that didn't stop us from acting like one. We still hunted together each day, protected eachother and watched out for each other. If anything, we felt more like a clan now then we did in Flowerclan. Of course every clan needs a leader, and Rosestar had rose to the occasion. We had found our own way to connect with Starclan, and I had journeyed with Rosestar and Petalheart there. Our days in Flowerclan had ended, but Petalclan was only just beginning.

Whisper me to join Petalclan!

Q and A with Dawnflower!

How have you lived so much and be so young?
✿I left Thornclan when I was only 8 moons old, because Slashstar liked to make kits apprentices early, and give them their warrior names when they were only 8 moons. I left as soon as I got my warrior name. I spent about 10 moons in Flowerclan, and the last 2 in Petalclan.

If you had to choose one of your kits, which one would it be?
✿I don't pick favourites!

Which clan do you like more, Flowerclan or Petalclan?
✿I miss my Flowerclan days, because that was were I made most of my memories. But Petalclan is my family, so I have to choose Petalclan.

How did you and Jet meet?
✿I met him after a gathering. He had been wandering around the Flowerclan borders when I was leading the clan back home, and I had kind of attacked him. But as I talked to him more I started to think he was a very nice tom. Change the subject please!!!

Which of your favourite colour?
✿Um, cats are colourblind?

Who is your closest friend in your clan?
✿In the clan? Well me and Creamypelt have been friends for ages, but Rosestar and Petalheart are my kits. So I guess there are multiple!

Whats in the future for you?
✿Well I'm getting ready to dedicate my life to Petalclan and my friends. I'm working on a way to communicate with other clan cats or loners who might want to join (Amino and Instagram).